Why do people teams switch
from Leapsome to Lattice?

With more than 4,500 customers worldwide and a global community of HR leaders, Lattice is the clear people success leader. Whereas Leapsome is relatively unknown, Lattice has a proven history of excellence.

Lattice gives managers everything they need to manage, develop, and empower employees over a clean and attractive interface that’s easy to navigate and control. While Leapsome has useful tools, their user experience often gets in the way.

Deploying Lattice is easy and intuitive, with point-and-click simplicity and expert guidance. People managers find Lattice much easier to administer and update than Leapsome, which lacks organizational and process scalability.

Where Leapsome falls short for people managers and HR

Leapsome gives managers a variety of tools for tracking employee performance, making it a competitive offering in this space. The platform’s main drawback is its lack of cohesion. Leapsome’s interface doesn’t flow well due to a limited user interface  that customers describe as buggy, clunky, and in need of improvement.

Some Leapsome users struggle with issues like difficulty discovering settings and features and navigating the platform’s complicated interface. These issues disrupt workflows, resulting in frustrating experiences for managers.

The platform also lacks the maturity, robustness, and speed expected by large, dynamic organizations. For example, Leapsome doesn’t allow you to import a competency framework from Excel/CSV, meaning the process of creating skills and assigning them to frameworks is very challenging. Upon deeper inspection, teams find out the hard way that the platform is full of similar limitations.

What’s more, Leapsome lacks critical customization capabilities. For example, the platform doesn’t let users create holistic individual development plans that incorporate both long-term career goals with their shorter-term development areas. Users also frequently request new features from customer support, indicating the platform is out of sync with the needs of its user base. Leapsome tries to address these concerns by promising prospects unbuilt features, but unfortunately for the majority of its customers, Leapsome gives its small number of larger customers the most  influence over the roadmap.

Making matters worse, Leapsome is difficult to administer and update, which significantly impedes scalability across larger organizations and more complicated processes. People managers need to invest hours of time into maintenance and upkeep of their people systems, since updating the platform is neither fast nor intuitive. 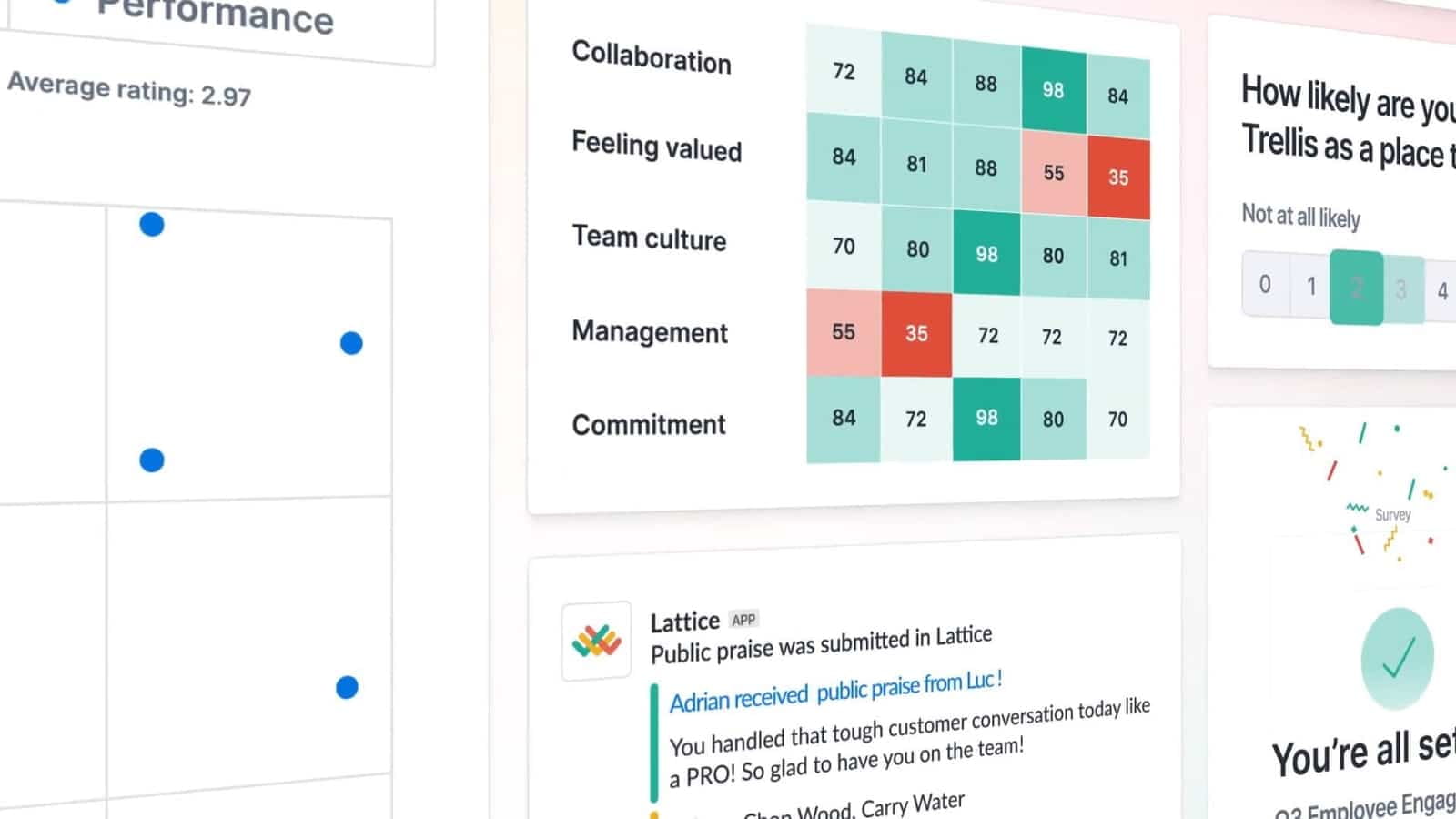 Lattice supports both cautious and aggressive rollouts, depending on the customer’s needs. For companies that prefer to move slowly and carefully, Lattice supports free trials and extended pilots at no cost. Customers can move at their own pace, learning as they go along and scaling up as they get more comfortable using the system.

Migrating to a people success platform is risky, and companies want to partner with providers that minimize risk in the process every step of the way. Lattice has a long track record of success, helping big-name brands like Slack and Reddit supercharge growth.

Lattice offers local customer service in both the US and Europe. Lattice’s UK office provides always-on phone support and expert guidance to customers when they need it.

Further, Lattice offers proven change management support with customizable resources to overcome barriers and increase platform adoption internally, making it an ideal choice for teams that want to leave no stones unturned when it comes to ensuring people success.

Lattice’s powerful surveys enable people managers to collect actionable feedback from everyone in your organization. In large part, this is due to the organizational behavior experts who write and vet all surveys. As a result, Lattice increases the chances questions resonate with employees, which improves the likelihood they share actionable insights.

As an added bonus, Lattice recently introduced a feature supporting anonymous comment replies in surveys, enabling managers to close the loop on employee feedback. Now, managers can respond to feedback on an individual basis while respecting employee anonymity.

Why Lattice vs. Leapsome for people success?

Lattice and Leapsome offer similar platforms, and both are useful for tracking performance and driving stronger outcomes.

Some of Leapsome’s strengths include analytics and visualization and multilingual support for multiple languages. But at the same time, Leapsome’s platform isn’t a great fit for enterprises seeking seamless deployments, smooth workflows, and hands-on customer support.

The main differences between the two platforms include the user experience, customizability, and scalability. Lattice has an overwhelming edge across all three categories, making the platform better suited for larger organizations needing to deploy a people success platform at scale.

Lattice also has the support and vision of a deep and innovative product roadmap. In addition, the UI is much cleaner and less buggy. And whenever issues may arise, customers have the full support of a dedicated customer service team with a global presence that spans U.S. and European time zones.

Help employees understand how they can impact the company and their careers with performance reviews, goal-setting, and effective 1:1s.

Collect feedback using surveys, pulses, and eNPS to understand and act on how your employees feel about work.

Does Lattice integrate customer feedback into its platform?

Lattice takes great care to consider all customer feedback, passing ideas along from service and sales representatives down to product engineers, managers, and developers. All suggestions must align with the platform’s roadmap and vision, and Lattice is ultimately very selective about what feedback goes into production.

That’s compared to Leapsome, which offers unbuilt features to prospects and promises to give a few of its largest customers significant influence over the roadmap by becoming customers. Most companies aren’t interested in using a tool specifically built to meet one company’s needs, which is why Lattice comes out on top.

Why do CEOs prefer Lattice?

Today’s  CEOs understand the critical role that people success has on business success. When you put people first, results follow. As a purpose-built people success platform, Lattice gives CEOs the peace of mind that comes with knowing they are trusting a proven solution to measure and continuously improve workforce performance, engagement, development, and culture. That’s compared to Leapsome, which has an unclear roadmap and is willing to offer prospects anything to get them to come on board.

To see why more companies are moving away from Leapsome and investing in Lattice to cultivate high-performing teams, request a personalized demo today.