Amber Authier of TWG: “What I love most is being able to see people grow.” Amber Authier is the People Operations Manager at The Working Group (TWG), a team of product managers, software engineers, and designers based in Toronto, ON, CA. She joined TWG when they were at 30 people and has seen them scale, over the past 5 and a half years, to 135 employees. Here, she outlines five pieces of advice based on the experience.

1. As your company grows, figure out how your people will grow too.

It’s been maybe in the last year where I realized what I love most is being able to see people grow. I enjoy seeing where people are when they’ve started working here, and then seeing them grow and sometimes go beyond our company, and on to newer roles. I just find that so satisfying — that feeling that maybe you had a small part in helping people develop new skills and grow into their full potential. It’s my absolute favorite thing about HR.

It’s as simple as asking: what’s the path this employee could take? When you’re at 30 people, everybody fills in the roles as needed and the growth of the company is not very mapped out yet. But as you start to get on that growth trajectory, you really have to map these things out and say: this is where I see this person a year from now, two years from now. This is where and why I think they could potentially leave. It’s those points that are particularly crucial, because if we know when they might find better opportunities elsewhere, we can figure out what we can do to combat that by giving them the opportunities here inside the studio.

You have to create the path in a way that the employee can actually see their roadmap — they have to know what’s ahead and what we see in terms of their potential. Because if they can’t see it, that’s where you start to lose people’s attention. They think they have to go elsewhere. And what we want to be able to say is, actually, there’s all sorts of opportunities here. Here’s where the company and you are now, and here’s where the company — and you — could be in a year.

2. Create processes for offboarding as well as onboarding.

At the same time, I’m a big proponent in acknowledging that, unfortunately, not everybody’s career path and trajectory is going to map perfectly to your organization. And the more comfortable you can get with people exiting, the more you can understand that sometimes the best thing for an employee is to give them an off ramp to help them find the next opportunity for them. For a long time, a lot of managers and executives at our company struggled with the idea of loyalty. It’s like, “Oh, I thought you were loyal to us.” But that goes both ways — and if we’re being loyal to the employee, that means we have to admit the role that they want might not be here.

So instead, let’s help them find that role outside of our company and foster that relationship moving forward. We’ve been lucky to have a couple of returning employees. And I love those stories. Every time it happens, I know it’s because we fostered the relationship to make sure their leaving was a positive experience.

And I’ve really been encouraging that philosophy here at TWG and I would love to see other companies understand that your relationship with an employee doesn’t have to end the day they leave the company. If you can maintain a good relationship with that employee you can create situations where employees might rebound and come back and work for you in a different role later on down the road. They might come back as clients or want to do business together, which is something we’ve seen here at TWG.

I think that that’s going to be something that we’re talking more and more about as an industry in the next couple of years.

To tie this back to the very first thing that I talked about — I love seeing people grow to their greatest potential. And sometimes we have to admit that that potential is not here and that’s life. I think that that’s going to be something that we’re talking more and more about as an industry in the next couple of years.

3. Be clear about what a feedback culture means.

I started here at TWG when we were about 30 people. I was the first person in an HR role to join the company. When you’re at 30 people, feedback is really simple because you’re likely to be in the room together, working on the same or very closely related projects. But the larger a company gets, the harder it is. I think for TWG, it was somewhere between 50 and 75 people where what worked at 30 people just wasn’t working anymore, because we had added a layer of management. And this is where Lattice became such a critical thing for us because all of a sudden the managers had to depend on other people to give their direct reports feedback on projects and behaviors — projects and behaviors that, before, the managers would just be observing themselves.

We looked at a lot of different philosophies and methodologies around feedback before deciding that 360 degree feedback was the best option for everyone involved. It allows people to get real-time feedback from the people who work with them regularly. It allows their managers to look for patterns in feedback.

So, if somebody’s on a project, and they’re struggling with that project, we want to be able to talk to them about that while they’re working on the project, not at a one time annual feedback conversation.

It is something that we have to get people comfortable with, right when they join the company. In our interviews we always say we’re a high feedback environment. People hear that a lot, but I don’t think they experience it quite the way it manifests in our culture. I think a lot of companies say they do it but they don’t really do it.

And so people will start and then go, “Oh, this is what you mean by high feedback environment.” And it can be kind of alarming. When someone is not used to getting that constant feedback, when they first start getting it they often worry, “Oh, am I doing terribly? Oh, do you all hate me?” And we have to go, “No, no, no, that’s not it. It’s actually quite the opposite. We really like you, we see a lot of potential with you and we feel like if we point these things out what might be small issues now it gives you the opportunity to be aware of them and we can work towards correcting them.”

We put so much effort into getting people comfortable with the environment, making sure that they understand how to open themselves up to receiving good feedback — and how that in turn makes them better givers of feedback too.

Few people think about the psychology of the physiological reactions people have to feedback. I actually utilize some of the great content that Lattice has for some of our sessions to illustrate that people have a fight-or-flight response to feedback. That physical reaction is what makes it so challenging for people to listen to — and give! — feedback. It’s an uncomfortable, confusing feeling. But we focus on learning how to pull that subconscious reaction into the conscious by going, “Okay, I’m having a weird reaction. What is that about?” And it’s proven to be very effective for people.

Our employees will tell me, “I never thought about what was happening to me subconsciously until I had a training session with you.” And then the next time they got feedback, they were like, “Hey, wait a second, something’s happening. I’m having a reaction.” It’s an ability, to just notice that about yourself. People can hone that skill and get super comfortable with receiving feedback. But it takes time.

For a company that moves at the pace that we do, it goes like this: you set up a system, it works great, and then all of a sudden one day you look at it and you’re like, “That’s not working at all anymore. Time to tear down that system and create a new one.”

I feel like I constantly have five of those systems that I can see starting to crumble. And I’m like, “If only I could get to it right now. It would be great.” So that notion of nothing ever being finished is a pretty true of HR. Any HR person that I’ve talked that’s worth their salt is always saying, “Oh, I’ve got 10 projects that I just can’t get it to.”

Onboarding is one that we’re doing right now. I think it’s the second time I’ve rebuilt the onboarding system because when I started, it was very easy to get people to know and understand what was available to them. Our processes and systems were not as vast and complicated as they are now.

But as you grow you naturally have to add more structure, more foundation. I rebuilt our onboarding structure once already when we were at 70-75 people, but now that we’re at 135, so it’s time to rebuild it again.

5. The one thing HR people need more of? Time.

There’s so much value HR can provide companies, which I think companies are starting to understand more and more. And we can do so many things — if we just have the time to do it. In order to manage that investment properly, companies need to have somebody at the leadership table to have a voice on how the company develops. I’m lucky to be in tech, where a lot of leaders are thinking about this in pretty good detail.

But do they understand it as much as I’d like them to? No, of course not. I think that’s always our job as HR people just to continue continually remind them that, “No, actually, this training has value. These programs that we run to teach people empathy, it has value. Making sure people are good managers, that has value.” 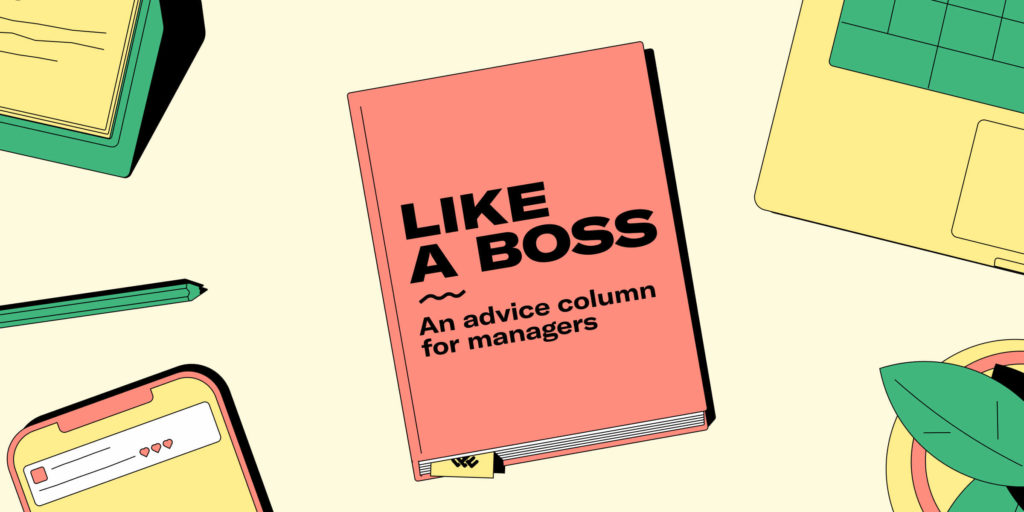 Like a Boss: “Am I burning out myself and my team with Zoom meetings?”