Check it out and join the community
Remote Work The COVID-19 pandemic had a lasting impact on how and where people work. With so many employees now familiar with remote work, many have decided they’d like to continue the arrangement long-term.

That isn’t just a hunch: Lattice’s latest State of the Employee Experience Report found that 48% of employees would consider quitting because of an organization’s remote work policy. The number is even higher (59%) for Gen Z and Millennial employees. The report includes feedback from over 3,000 US and UK employees.

Those weren’t the only surprises in this year’s survey, which focused primarily on hybrid and remote work. Here’s what else employees had to say.

1. Hybrid work is the new normal.

“Hybrid” isn’t as novel a concept as it used to be. According to our latest research, distributed work is the new normal for many, with 57% of survey respondents working in either remote or hybrid environments. Among hybrid workers, the majority (64%) report to the office two to three times per week.

Though popular on both sides of the Atlantic, hybrid work seemed especially common among UK workers. Over half of UK respondents (52%) work in a hybrid environment, compared to 34% in the US. Notably, UK workers also spend less time in the office than their US peers, with most coming in just two days or less.

Still, normal as it may seem now, not everyone believes the arrangement is here to stay. While most employees (56%) feel their organizations’ remote work policy is settled for 2023, over a third expect changes in the next 12 months. Overall, 16% expect their company policy will become less flexible in the year ahead.

2. Most workers aren’t onsite by choice.

Have more flexible work arrangements become more of the norm in recent years? Absolutely. But there are still plenty of organizations that require their employees to work in the office, either full or part-time. Of the employees surveyed working in an office full time, only 14% are there by choice. The remaining 83% are there because their employer made it mandatory.

And even hybrid workplaces can be inflexible about in-office work. According to our survey, over 40% of hybrid companies dictate specific days of the week when employees need to come in. The remainder (57%) allow their employees to choose the days they want to work in the office.

While they may not always be satisfied with their company’s policy, our research did show that most employees (83%) are willing to comply. Still, the remaining 17% reported that they don’t always comply with the specific days required to be in the office. And non-compliance is an even bigger issue in the UK, where 20% of employees say they sometimes skip their required in-office days, compared to just 13% of US employees.

Mandates aren’t the only thing keeping offices afloat, however. So what drives someone to come into the office even if they don’t have to be there? Our survey found that employees who voluntarily go into the office are motivated by a preference for the office environment (82%) and personal connection (78%).

In-office perks don’t have the same sway. Less than half of respondents consider in-office benefits, like catered lunches and in-office gyms, as a lead consideration for returning to the office. Companies seem to be getting the memo, as only 14% of employees report that their companies had added additional office perks over the past year.

4. Satisfaction and flexibility are linked.

When looking at satisfaction and employee mental health, another clear trend emerges: Employees “strongly satisfied” with their level of flexibility are twice as likely to believe their work has a positive impact on mental health.

Compared with their less-satisfied counterparts, employees who reported satisfaction with their level of flexibility were over twice as likely to say they were optimistic about future growth opportunities within their organization (61% compared to 29%). In addition, employees that are satisfied with their job and work arrangement are generally more engaged with their work and less likely to leave to look for a new opportunity — all of which can lead to increased productivity, better performance, higher employee engagement, and higher employee retention.

One thing is clear when you dig into the data: Employees overwhelmingly want more flexibility at work. And if organizations want to empower that talent to perform at their highest level, it’s essential to consider those needs.

For a closer look into our survey findings, contact our team at [email protected]. You can also read Lattice’s 2023 State of People Strategy Report to learn what initiatives and programs HR teams plan to prioritize for the year ahead. Driving Engagement and Retention in the Hybrid Workplace 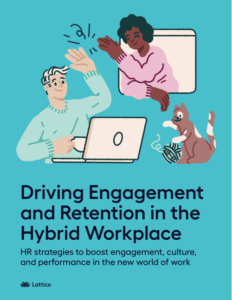 Everything You Need to Know About Managing Remote Employees